Bill Nye to speak at The Mendel Center Feb. 8 as part of The Economic Club of Southwestern Michigan Speaker Series 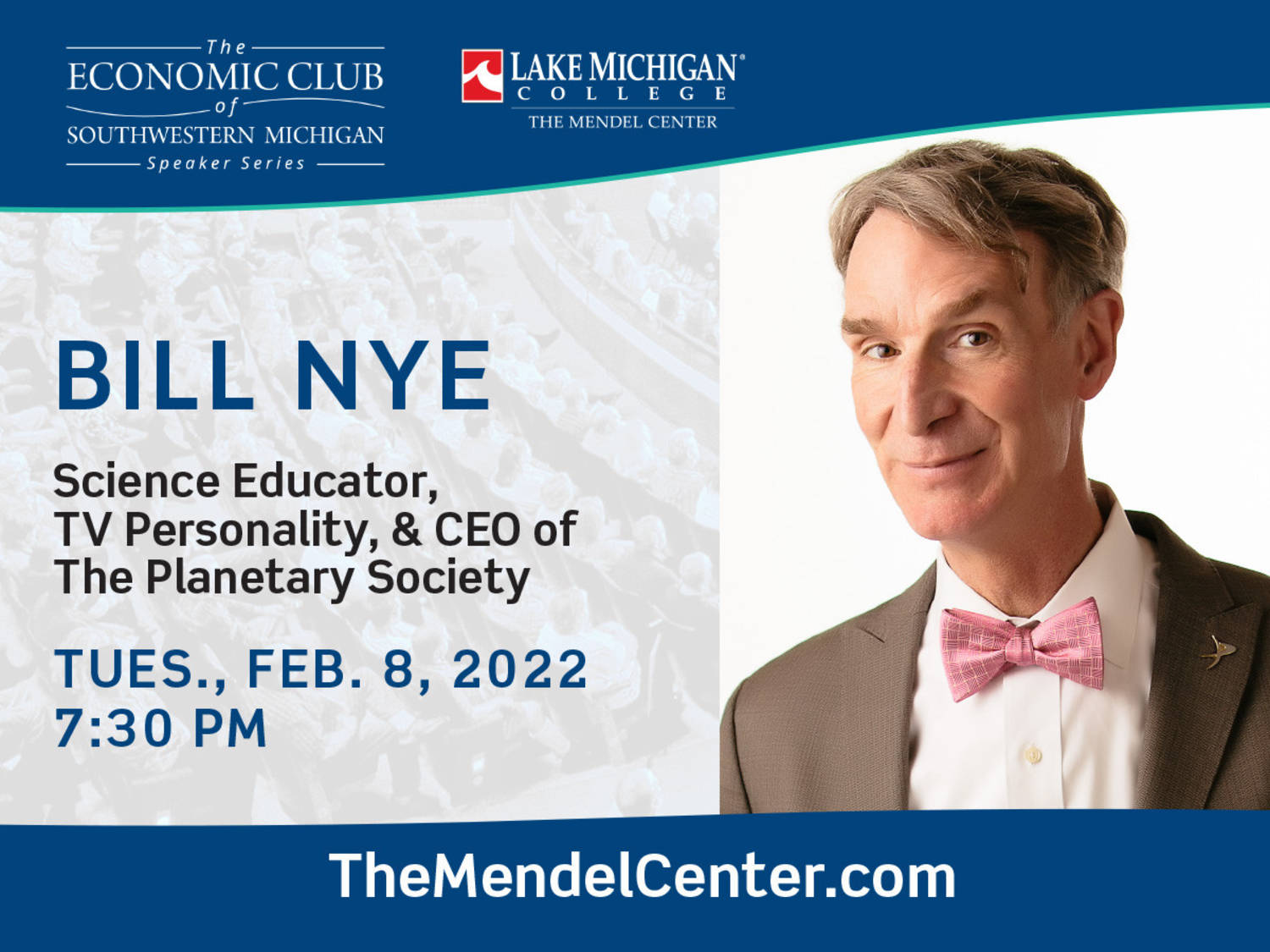 Bill Nye—scientist, engineer, comedian, author and inventor—is a man with a mission: to help foster a scientifically literate society and to help people everywhere understand and appreciate the science that makes our world work.

Perhaps best known as Bill Nye the Science Guy, Nye’s wit and enthusiasm garnered 18 Emmy awards. Nye is also an author and frequent speaker on topics of global importance including climate change, evolution, population, space exploration, and STEM education. He is a steadfast champion of the unwavering value of critical thinking, science, and reason.

Most recently, Nye was the subject of the documentary film Bill Nye: Science Guy. This behind-the-scenes portrait of Nye follows him as he takes off his Science Guy lab coat and takes on those who would deny climate change, evolution, and a science-based worldview.

His 2014 debate with a creationist who believes the earth is only 6,000 years old has been viewed nearly 6.5 million times on YouTube. After that experience, Nye wrote his first book for a general audience, Undeniable: Evolution and the Science of Creation, which went on to become a New York Times bestseller. His most recent release is Bill Nye’s Great Big World of Science. He is also the author of seven children’s books, including his best-selling fiction series, Jack and the Geniuses.

Nye hosts the Science Rules! podcast and is joined regularly by field experts and celebrity guests to discuss a range of scientific topics and encourage people to think differently about the world around them.

Nye also serves as CEO of the Planetary Society, the world’s largest space-interest group.  And, as an inventor, he holds a number of unusual patents, including an improved toe shoe for ballerinas, a device to help people learn to throw a baseball better, a magnifier made of water, and an abacus that does arithmetic like a computer – with only binary numbers.

Nye graduated with a mechanical engineering degree from Cornell University and returned there as a visiting professor from 2001-2005. In 2010, Nye joined the ranks of his astronomy professor Carl Sagan when he was elected the American Humanist Association’s “Humanist of the Year.”

During “An Evening with Bill Nye,” he will share his infectious blend of humor, intellectual curiosity, and devotion to solving some of the world's most complex challenges through science.

A pre-presentation buffet dinner will be served in newly renovated Grand Upton Hall. Dinner begins at 5:30 pm. A brief appearance by the speaker is planned during dinner. Following dinner, ticket holders for Nye’s presentation will take a short walk through The Mendel Center to their seats in the Mainstage. Dinner and presentation tickets are sold separately.

General admission presentation seats by zone ($50 - $80) and dinner tickets ($35) are on sale now at www.TheMendelCenter.com/events, by calling 269-927-8700, option 1, or by visiting The Mendel Center Box Office in person. The box office is open weekdays from 2 to 6 pm.