A new adventure is coming to southwest Michigan 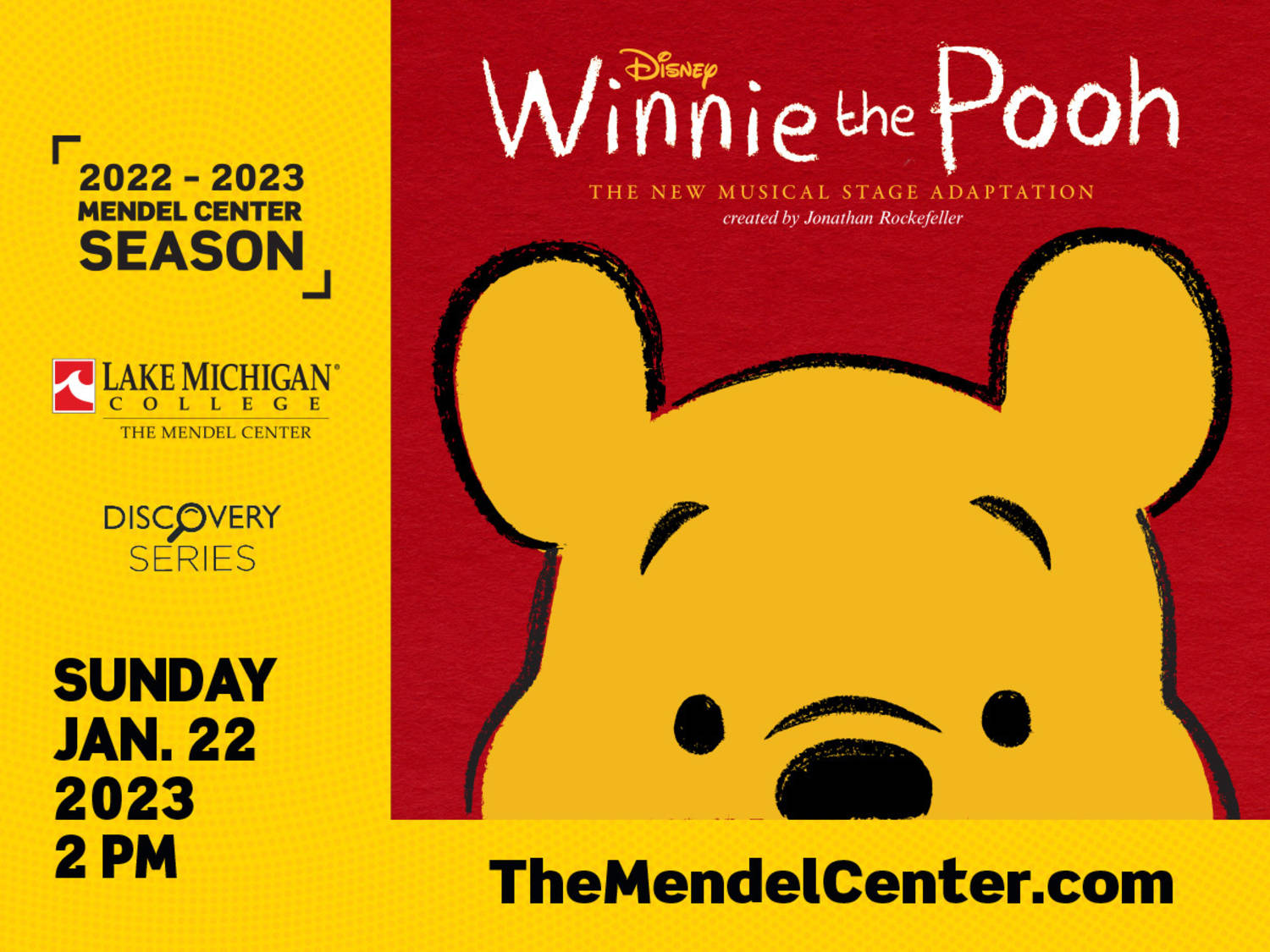 ‘Disney’s Winnie the Pooh: The New Musical Stage Adaptation’ makes a tour stop at the Lake Michigan College Mendel Center for one performance only

The acclaimed, record-breaking run of “Disney's Winnie the Pooh: The New Musical Stage Adaptation,” created and directed by Jonathan Rockefeller, will arrive in southwest Michigan at 2 p.m. Sunday, Jan. 22, 2023. The celebrated show for families of all ages will bring Pooh, Christopher Robin, and their best friends Piglet, Eeyore, Kanga, Roo, Rabbit, and Owl (and Tigger too!) to the Lake Michigan College Mendel Center, 2755 E. Napier Ave., on the Benton Harbor Campus.

Inspired by the beloved books by A.A. Milne and the classic Disney featurettes, “Disney's Winnie the Pooh: The New Musical Stage Adaptation,” which was welcomed in New York beginning in October 2021, garnered rave reviews where it was called:

"A perfect introduction to live theater. It's a captivating adventure with spectacular puppetry." (Mommy Poppins)

"Charming and whimsical stage show that Pooh surpasses every expectation I had for it." (The Laughing Place)

“The new 'Winnie the Pooh' musical Is sweeter than honey." (Toy Insider)

"The music, the spectacular life-size puppets, and the charming performances are the perfect way to introduce, or re-introduce, audiences to live theatre, and this is a must-see show for Winnie the Pooh fans of all ages,” Creator and Director Jonathan Rockefeller said. “We are excited to bring the Hundred Acre Wood across the United States so that audiences of all ages can join us for this heartwarming production.”

In a new story from the Hundred Acre Wood featuring impressive life-size puppetry, this fresh stage adaptation tells exciting new stories of the characters that have played iconic roles in the lives of children for generations. Accompanying the magical, modern narrative is an original score from Nate Edmondson, which features some of the songs written for the animated feature from The Sherman Brothers, including “Winnie the Pooh,” “The Blustery Day,” “The Wonderful Thing About Tiggers,” “Whoop-De-Dooper Bounce,” and A.A. Milne's “The More It Snows.”

About the show
“Winnie the Pooh” has been enjoyed by millions of readers and viewers ever since English author A.A. Milne first chronicled the adventures of Christopher Robin's friends in the Hundred Acre Wood in 1926. The books, featuring illustrations by English illustrator E.H. Shephard, have sold over 50 million copies worldwide.

The theatrical rights to the Pooh stories were acquired by Disney in 1961, with an original intent to produce a feature film. However. after production began, Walt Disney decided to make short featurettes instead. The three featurettes were subsequently incorporated into the feature “The Many Adventures of Winnie the Pooh.” This was the last film in the Disney canon in which Walt Disney had personal involvement. The first featurette, “Winnie the Pooh and the Honey Tree” was released during his lifetime, while “Winnie the Pooh and the Blustery Day” was still in development. Disney's “Winnie the Pooh” has since become one of the best-loved and most successful franchises in history.

The Sherman Brothers are the multi-talented Oscar and Grammy Award-winning American songwriting duo of Richard M. Sherman and Robert B. Sherman. They wrote more motion-picture musical scores than any other songwriting team in film history.  Among these are the Disney classics “Mary Poppins,” “The Jungle Book,” “Bedknobs and Broomsticks,” and “The Aristocats.”

Jonathan Rockefeller and Rockefeller Productions have received global acclaim for their adaptations of such iconic works as “Winnie the Pooh,” “The Very Hungry Caterpillar,” and “Paddington Bear.” Rockefeller’s production of “The Very Hungry Caterpillar Show,” based on the books of renowned author/illustrator Eric Carle, tours in over 12 countries. Its debut run in New York City, along with New York Times Critic’s Pick Paddington Gets in a Jam, both resulted in Drama Desk and Off-Broadway Alliance nominations. Most recently, “Sesame Street: The Musical” debuted Off-Broadway, preceded by “Disney’s Winnie the Pooh: The New Musical Adaptation” (produced in association with Disney Theatrical Productions) which is currently on its first national tour and will open in the West End next year.

Other projects include the award-winning short film, “10 Little Rubber Ducks,” written by preeminent author/illustrator Eric Carle and the Christmas special “Paddington Saves Christmas” and the Rockefeller Sports & Events division which has “Pixar Putt” and the “Awesome LEGO Exhibition” playing across the country.

Reserved seating tickets starting at $30 are on sale now at www.TheMendelCenter.com, by calling 269-927-8700, option 1, or by visiting the Mendel Center box office in person. The box office, located in the Grand Upton Hall Lobby, is open weekdays from 10 a.m. to 6 p.m., and one hour before events.

VIP tickets are also available for $30. Each VIP seat comes with an exclusive merchandise item and photos on stage with select characters after the show. VIP and performance tickets sold separately.

This event is part of the Mendel Center’s Discovery Series and is funded in part by the Gast Young People’s Performance Endowment. This activity is supported by the MICHIGAN ARTS AND CULTURE COUNCIL.