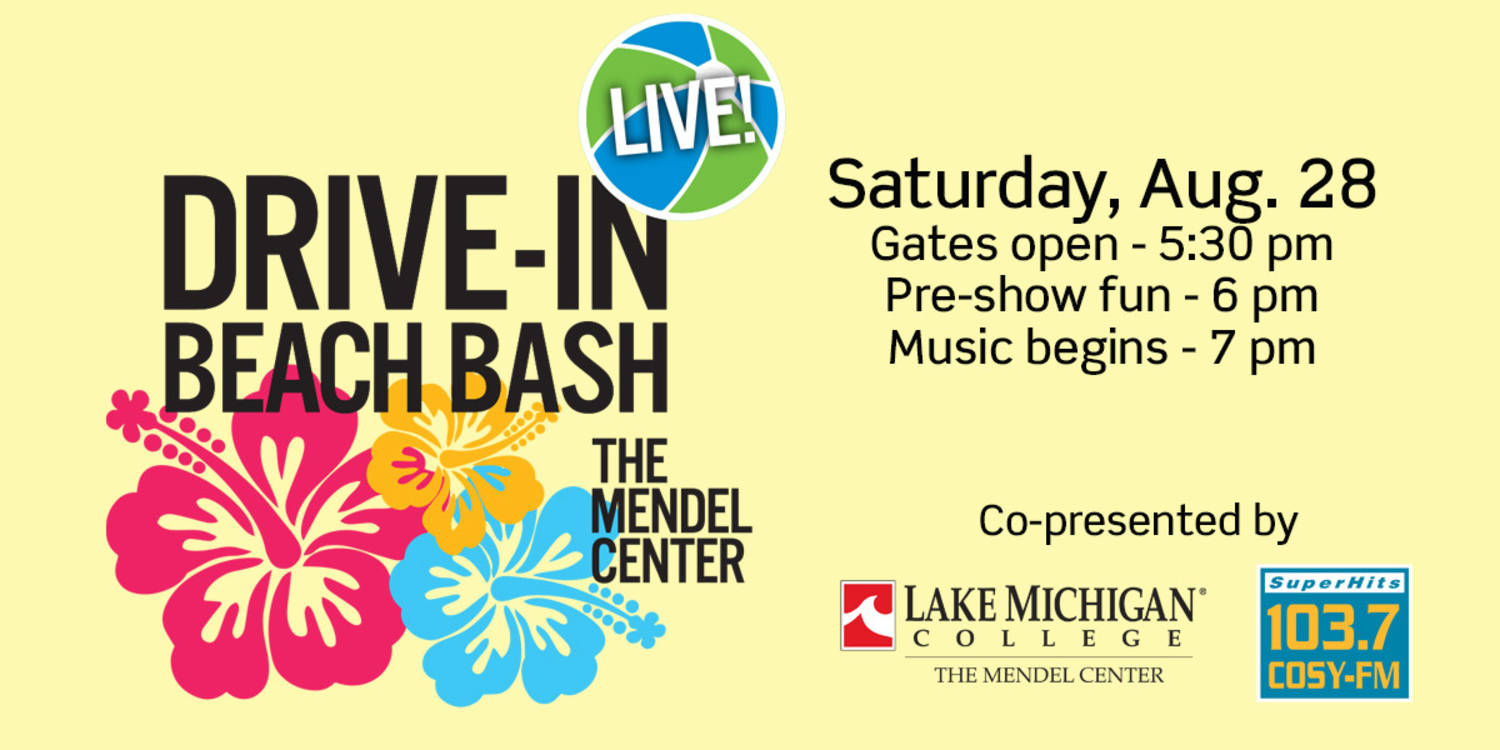 On Saturday, August 28, The Mendel Center parking lot will be transformed into the ultimate beach party. The Drive-in Live Beach Bash, which leads off The Mendel Center’s 2021-22 performance and events season, will welcome attendees with a beach sand dance zone, beach-themed contests, a Classic Car Corner, and music from Gary Roland and The Landsharks Band. The event is co-presented by The Mendel Center and SuperHits 103.7 COSY-FM.

“The Drive-in Live concert series we hosted last summer inspired us to expand the concept this year now that larger gatherings are allowed,” stated Mike Nadolski, executive director of The Mendel Center. “To create that Key West vibe, we will be bringing in truckloads of sand, serving up margaritas and cheeseburgers, and bringing in one of the top beach party bands in the country to play summertime favorites by the likes of Jimmy Buffett and The Beach Boys.”

Gates open at 5:30 pm for this family friendly event. Party goers can either bring their lawn chairs to enjoy the festivities stage side, or park and tailgate near their vehicles. Those who wish to bring their pre-1980’s vintage vehicle can park in the Classic Car Corner with other car enthusiasts. Classic Car Corner attendees are entitled to one free admission with advance registration. Additional admission tickets can be purchased at regular price.

At 6 pm, the fun gets underway with hula hoop and limbo contests and trivia competitions. Beverage and food sales begin, featuring margaritas (21+), cheeseburgers, and other summertime mainstays.

At 7 pm, Gary Roland and The Landsharks Band will have everyone on their feet in the beach sand dance zone with their high energy performance and interactive stage show.

About the Band
The Landsharks have performed for millions of people all over the world, from Key West to Diego Garcia - an island in the middle of the Indian Ocean, and everywhere in between. And there are many stories to tell along the way.

The Landsharks were performing at a Key West, Florida, concert when Jimmy Buffett made a surprise visit and asked if he could perform with the band. He liked them so much that he hired them “on the spot” as house band for his brand new Margaritaville Café at Universal Studios and had them open up for him at the grand opening.

After performing with them, Buffett proclaimed, “The Landsharks are showmen. They’re a fun band. Funny thing was, The Landsharks knew the songs better than I did, and I loved some of their arrangements.”

The Landsharks have also opened up for several major artists including The Beach Boys, Patti Labelle, Three Dog Night, War, Club Trini, Inner Circle, and more. They have performed at parties for Bill Gates of Microsoft, Michael Eisner of Walt Disney, filmmaker George Lucas, the Prime Minister of Canada, and other notables. The Landsharks were also the first band to play at Bob Marley’s Café for guests including Bob’s wife Rita Marley.

The Landsharks have performed hundreds of shows in Walt Disney World including the Millennium New Year’s Eve show. The band was selected from thousands of entrants to be the opening act for the Beach Boys at the First Flight Centennial Celebration in Kitty Hawk, North Carolina in 2003. They played not once, but twice, for the New England Patriots organization during Super Bowl XXXIX festivities, including the post-game party.

At a Landsharks show, it’s possible to see flying inflatable sharks, members of the audience playing along with the band on the band’s supply of percussion instruments such as tambourines, maracas, and more.

Tickets
General admission tickets for the Drive-in Live Beach Bash are $25 per person. They are available at www.TheMendelCenter.com and through The Mendel Center box office at (269) 927-8700, option 1 weekdays from 2 to 6 pm. In-person box office hours are 2 to 6 pm Tuesdays through Thursdays. The box office is located in The Mendel Center Grand Upton Hall lobby at 2755 E. Napier Avenue, Benton Harbor, parking lot entrance 3 off Yore Avenue. Published ticket prices do not include applicable fees. Standard discounts may not be available for this special engagement.