The Lake Michigan College COVID-19 policy for campus visitors has been updated to a "masks suggested" policy. Learn more about The Mendel Center's response to COVID-19 here 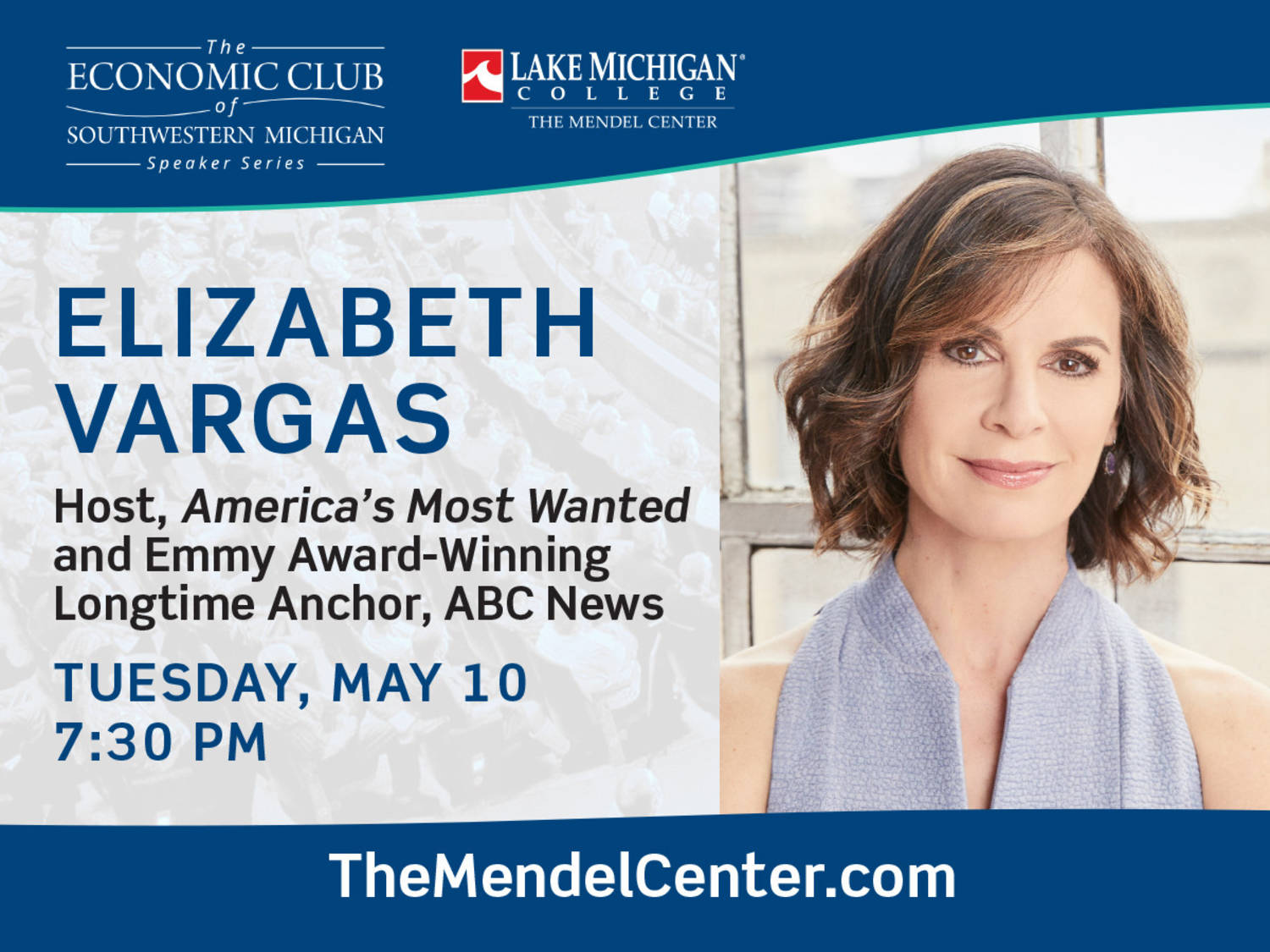 The Economic Club of Southwestern Michigan Speaker Series, hosted by The Mendel Center at Lake Michigan College in Benton Harbor, Michigan, welcomes Elizabeth Vargas on Tuesday, May 10, 2022, at 7:30 pm.

This Emmy Award-winning journalist has traveled the world covering breaking news stories, reporting in-depth investigations, and conducting newsmaker interviews. She is the host of America’s Most Wanted and of the podcast Heart of the Matter. She most recently co-hosted the hit newsmagazine show 20/20 and previously served as co-anchor of World News Tonight, anchor of World News Tonight Sunday, news anchor and frequent co-host on Good Morning America, correspondent for 20/20 and Primetime Thursday, and was the co-anchor of Primetime Monday.

During the historic Iraqi elections in December 2005, she reported extensively for World News Tonight from Baghdad on both civilian life in Iraq and American military involvement there. She has interviewed leaders from around the world, including President Bush from the oval office in the White House. Vargas has also anchored ABC News coverage of live, breaking news stories including the deaths of President Ronald Reagan and John F. Kennedy, Jr., as well as Hurricane Katrina's devastation of the U.S. Gulf Coast. Her story on the hero NICU nurses of Hurricane Sandy was part of the ABC News' Peabody Award winning coverage. Vargas won an Emmy in 2000 for Outstanding Instant Coverage of a News Story for anchoring live coverage of the Elian Gonzalez case.

In 2016, Vargas released her memoir, Between Breaths: A Memoir of Panic and Addiction. The book   details her struggles with anxiety and alcohol, and tells a powerful story of healing and coping. Vargas currently serves on the board of directors for the Partnership to End Addiction.

During “Behind the Headlines with Elizabeth Vargas,” Vargas bravely discusses how alcoholism has affected her life and career, and why she chose to publicly share her struggle with the disease and her ongoing recovery. With her signature candor and insight, she also provides a behind-the-scenes look at today’s live news reporting and ever-evolving media.

A pre-presentation buffet dinner will be served in Grand Upton Hall. Dinner begins at 5:30 pm. A brief appearance by the speaker is planned during dinner. Following dinner, ticket holders for Vargas’ presentation will take a short walk through The Mendel Center to their seats in the Mainstage. Dinner and presentation tickets are sold separately.

High school and college students are invited to attend a free Student Q&A session with Vargas beginning at 6:25 pm in Grand Upton Hall. Registration is strongly encouraged at www.TheMendelCenter.com/events.

About The Economic Club of Southwestern Michigan Speaker Series
Established in 1943, the Economic Club of Southwestern Michigan has brought more than 430 world leaders, policy makers, experts, and other newsmakers to the region. Its goal is to provide unique opportunities for personal and community growth. By presenting national and international speakers from a wide range of fields and expertise, this non-partisan series is dedicated to the discussion of social, economic, and public policy questions important in today’s complex society.

About The Mendel Center at Lake Michigan College
The Mendel Center raised the curtain on its first Mainstage season performance in the fall of 1992. Since that time, it has presented Mainstage season performances to more than half a million patrons in the 1,559-seat Mendel Center Mainstage Theatre. Newly renovated Grand Upton Hall, first opened in 1979, is a 13,700-square-foot venue serving the community as the host site for meetings, banquets, trade shows, weddings, and other celebrations. The 234-seat Hanson Theatre is home to the Lake Michigan College Visual & Performing Arts Departments as well as a variety of Mendel Center and community events.