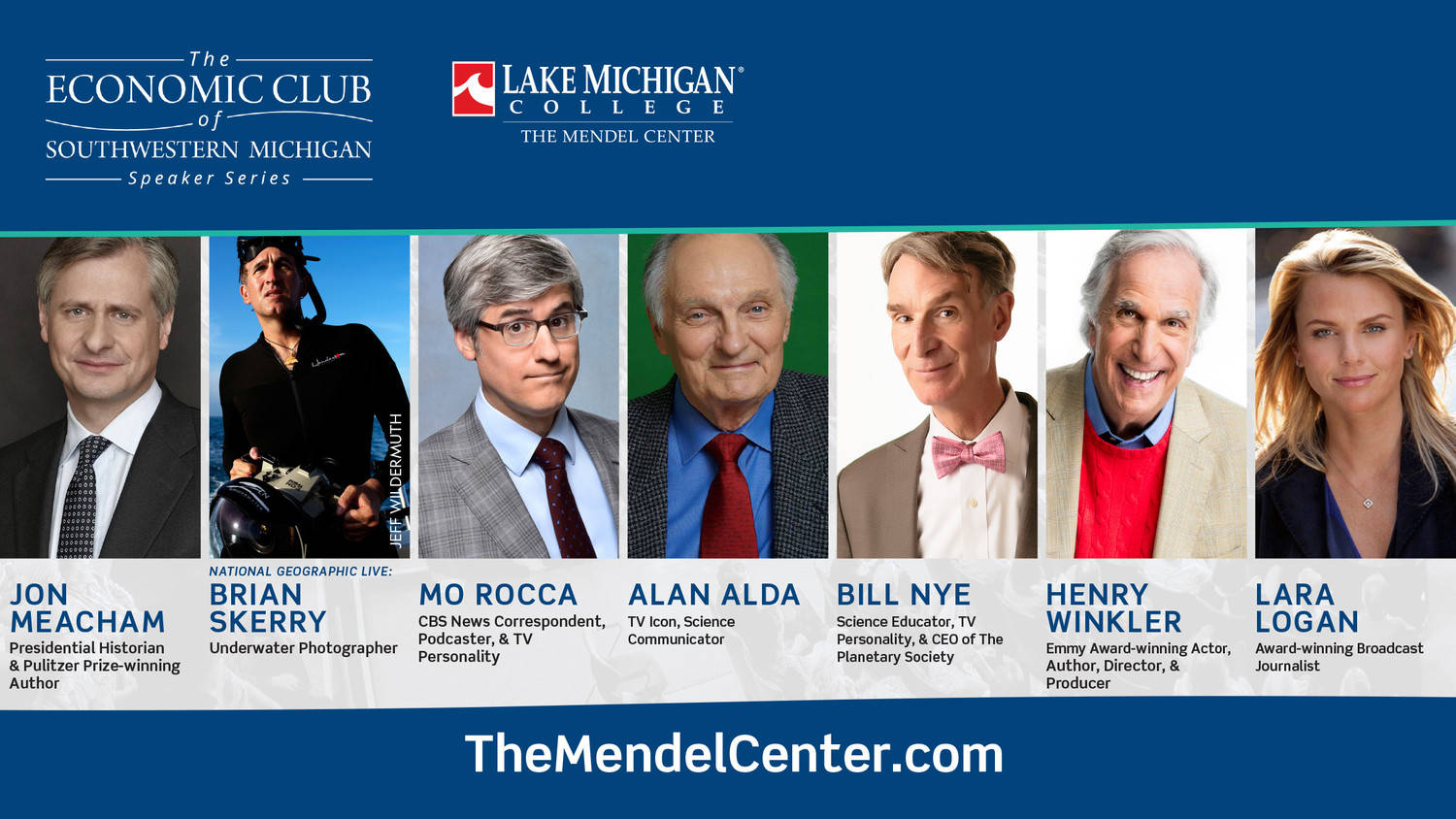 The announcement of a seven-speaker season lineup marks the planned return of in-person events for the 2021-22 Economic Club of Southwestern Michigan Speaker Series hosted by The Mendel Center at Lake Michigan College.

“After everything we’ve all been through during the past year, it is exciting to look ahead to welcoming the community back with this lineup of highly requested Speaker Series guests,” stated Mendel Center Executive Director Mike Nadolski.

According to Nadolski, the season is a blend of presenters who were originally part of the 2019-20 season but whose appearances were postponed due to the pandemic shutdown, and speakers who had already been scheduled for the 2020-21 season before COVID-19 gathering restrictions were put into place.

“Two of the three final speakers from last season – Brian Skerry and Henry Winkler – rejoin our slate of guests. The third, The Honorable Malcolm Turnbull, is expected to be part of the 2022-23 season, likely in the fall of 2022. Joining Skerry and Winkler are Jon Meacham, Mo Rocca, Alan Alda, Bill Nye, and Lara Logan. We are fortunate that all of these individuals have been available to reschedule their time with us,” Nadolski added.

In anticipation of evolving pandemic gathering limitations, several updates and additions are planned for the upcoming season.

Seating Capacity & Wait Lists
The number of tickets available for purchase will be based on seating capacity guidelines set by state and local authorities at the time tickets go on sale. As capacities are expanded, wait listed individuals will be offered the opportunity to purchase tickets in the order they are added to the list.

Zoned General Admission Seating
For the 2021-22 season, seating for all Mainstage events will be general admission by zone – two zones on the main floor plus one zone in the balcony. Because of potential changes in allowable seating capacities and configurations, this plan allows for seating flexibility, provides patron health protections, and reduces potential disruption for ticket holders.

Live Stream Viewing in Grand Upton Hall
To provide additional socially distanced seating options during the 2021-22 season, tickets will be available for live stream viewing of speaker events while seated in Grand Upton Hall. Every effort will be made to have speakers make brief live appearances in Grand Upton Hall prior to the main address.

Online Live Stream Option
Knowing that some people may not be ready or able to attend in-person events right away, select speaker events will be available for live stream viewing from home.

“This will be a transition year for everyone,” Nadolski commented. “Undoubtedly, there will be unexpected twists and turns. By acknowledging that and looking for new ways to put patrons’ best interests first, we hope to minimize inconveniences while giving everyone an opportunity to experience these insightful presenters.”

Presidential historian and Pulitzer Prize-winning author Jon Meacham is one of America's most prominent public intellectuals. A contributor to TIME and The New York Times Book Review, Meacham is a highly sought-after commentator, regularly appearing on CNN and MSNBC. A skilled orator with a depth of knowledge about politics, religion, and current affairs, Meacham brings historical context to issues impacting our lives. During “The Art of Leadership: Lessons Learned from the American Presidency,” Meacham explores what 21st-century leaders can learn from the greatest moments of our common past. This presentation — non-partisan in content and tone — examines how history can inform the decisions all of us make every day in positions that demand innovative solutions.

National Geographic photographer Brian Skerry has spent more than 10,000 hours underwater, often in extreme conditions beneath Arctic ice and in predator-infested waters. Journey with him from the North Atlantic, where harp seals face the threat of declining sea ice, to the temperate waters of New Zealand, home of the fastest shark in the world—the mako. The stunning images he captures while on assignment offer a mesmerizing glimpse of the “soul of the sea." During his presentation, "Ocean Soul," you will voyage across the ocean and discover a vast, hidden world beneath the waves.

Humorist, journalist, and actor Mo Rocca is best known for his off-beat news reports and satirical commentary. Currently a correspondent for CBS Sunday Morning, Rocca is also the host of CBS’s series The Henry Ford’s Innovation Nation. Rocca’s podcast Mobituaries and New York Times bestselling book of the same name reflect an irreverent but deeply researched appreciation of the people (and things) of the past who have long intrigued him—from an unsung Founding Father to the ﬁrst Chinese-American superstar, from Neanderthals to the station wagon. During “Mobituaries with Mo Rocca: Great Lives Worth Reliving,” he will provide an inside look at how his long love of obituaries spawned the Mobituaries podcast.

Actor, writer, science advocate, and director are just a few of Alan Alda’s many job titles. Throughout his career, he has won seven Emmys, six Golden Globes, three DGA awards for directing, and the SAG Lifetime Achievement Award for career achievement and humanitarian accomplishment, considered SAG’s highest tribute. His podcast Clear + Vivid has been downloaded 12 million times. With over 40 years in the entertainment industry, Alda has mastered the trade secrets of successful performers. In his talk, “The Art of Communicating – In Business and Life,” he shares how improvisational theater techniques can be used to train leaders, employees, and individuals to boost their own creativity and unleash their innovative and collaborative abilities.

Bill Nye is an Emmy-award winning television host, science educator, mechanical engineer, podcast host, and author who is best known for his role as the star of the timeless 90’s science program “Bill Nye the Science Guy.” Since 2010, Nye has served as the CEO of The Planetary Society where he has played a central role in fulfilling the organization’s mission to advance space science and exploration.  He is a New York Times best-selling author and has written various titles, including the recently released “Bill Nye's Great Big World of Science.” Nye also hosts the Science Rules! podcast and is joined regularly by field experts and celebrity guests to discuss a range of scientific topics and encourage people to think differently about the world around them. He has built a career on promoting science literacy and is passionate about using science as a vehicle to inspire people of all ages to change the world for the better. During “An Evening with Bill Nye,” he will share his humor, intellectual curiosity, and devotion to solving some of the world's most complex challenges through science.

From his breakout role as The Fonz on Happy Days to his current co-starring role as acting coach Gene Cousineau on the hit HBO dark comedy Barry, Henry Winkler has enjoyed over four decades of success as an actor, producer, and director. Beyond this Emmy Award-winning actor’s success on stage and screen, Winkler is a New York Times best-selling author. His works include a 34-book children’s series co-authored with Lin Oliver and inspired by his own struggles with undiagnosed dyslexia, as well as the duo’s latest book Alien Superstar. During “An Evening with Henry Winkler,” he will share humorous anecdotes and inspirational lessons based on his life and storied career.

Lara Logan’s bold reporting from war zones for more than two decades has earned her a prominent spot among the world’s best foreign correspondents. Named CBS News Chief Foreign Correspondent and Chief Foreign Affairs Correspondent, all while contributing to 60 Minutes and 60 Minutes II, Logan has reported regularly for the CBS Evening News and appeared on The Early Show and Face the Nation. During “On the Front Lines with Lara Logan,” she will offer a comprehensive behind-the-scenes look at foreign affairs in the media. Speaking candidly, she shares her experiences reporting from the front lines, both as a journalist and as a citizen.

Pre-speaker dinners
For those who enjoy the social aspect and convenience of having dinner at The Mendel Center before speakers take the stage, that opportunity continues to be available. Grand Upton Hall buffet dinners begin at 5:30 pm. Members may purchase this add-on option at a discounted member price of $25 per dinner. If dinner tickets remain following the membership drive, they will be made available for $35 to individual speaker ticket holders. Capacity will be limited.

The Economic Club of Southwestern Michigan Speaker Series enters its 78th season. It has brought more than 435 world leaders, politicians, newsmakers, and experts to the region. During the 2020-21 season, a lineup of local experts delivered virtual presentations at a time when in-person gathers weren’t possible due to the pandemic. The goal of this non-partisan series is to provide unique opportunities for personal and community growth by presenting a wide spectrum of ideas and viewpoints through commentary by innovative, energizing, and insightful national and international speakers.

The Mendel Center is 30 minutes from Niles and 40 minutes from the Kalamazoo and South Bend areas. It is located on the Lake Michigan College campus at 2755 E. Napier Avenue, Benton Harbor, Michigan. The Mendel Center is one mile east of I-94 (Exit 30) and one mile west of the US 31 Bypass (exit 24). The GPS mapping address is 1100 Yore Avenue, Benton Harbor, MI.