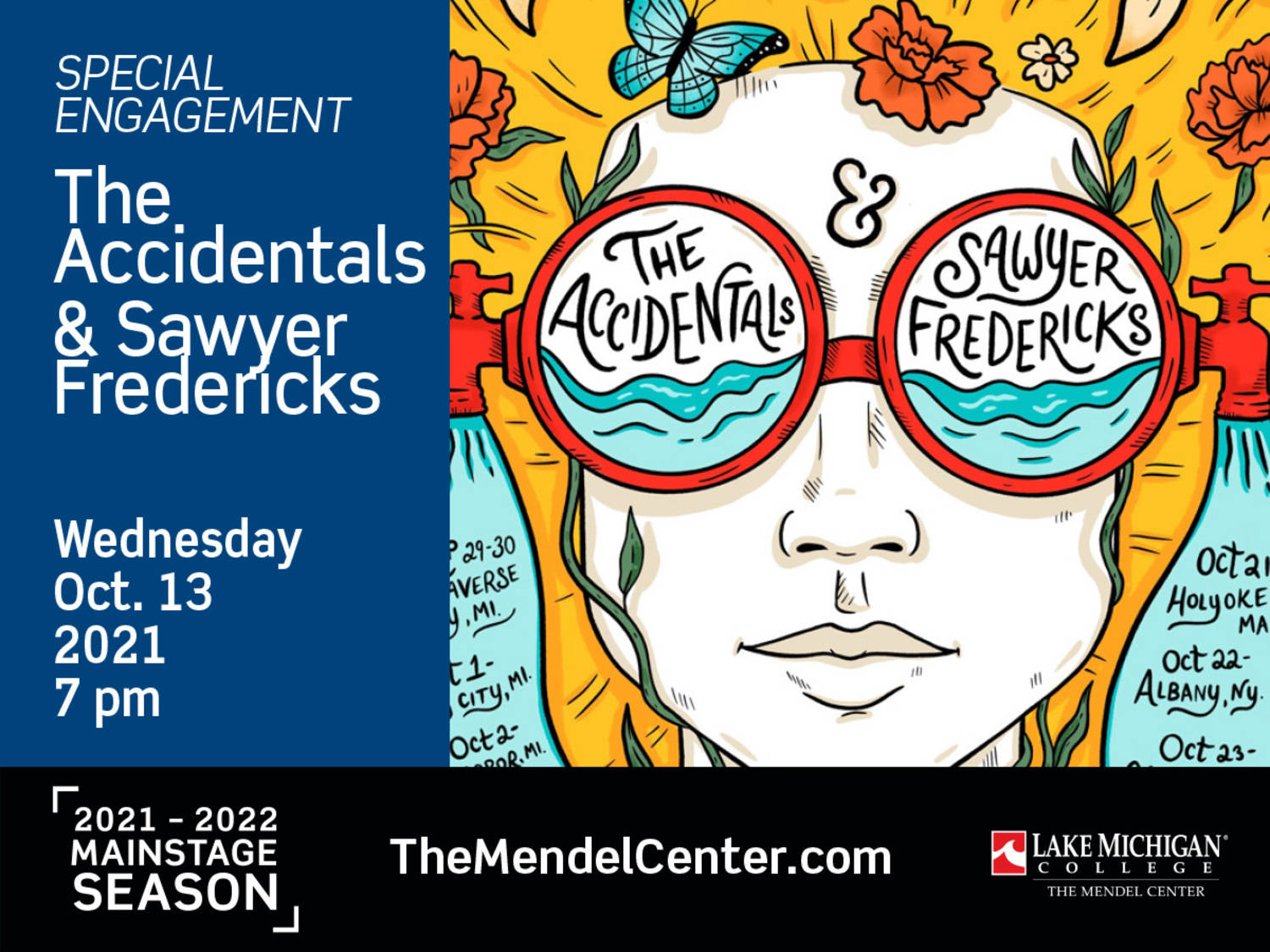 On Wednesday, October 13, at 7 pm, The Mendel Center at Lake Michigan College welcomes The Accidentals and Sawyer Fredericks during a stop on their co-headline album release tour.

This co-bill tour will take The Accidentals, joined by their friend and collaborator Fredericks, throughout Michigan and the Midwest before heading east for a southerly jaunt from Boston, through New York, Philly, D.C., and down into the Southeast.

About The Accidentals
The Accidentals are a female-fronted, multi-instrumentalists power trio. Their music is dynamic and intelligent, a blend of Neko Case lyrics, Jack White rock, and Queen dynamic. It’s edgy, indie, folk-influenced pop rock.

Billboard says, “The Accidentals display a genre-hopping range of influences and some smart songwriting skills to go with their abundant musical chops.”

NPR called the band “some of the most compelling writers of our time,” before saying “they display equal interest in the focused musical forms of indie rock and pop and the expansive potential of orchestral arrangements, jam band open-endedness, and impressionistic singer-songwriter expression.”

Long before glowing acclaim, packed shows, unforgettable festival appearances, millions of streams, and collaborations with everyone from BTS to Contemporary Youth Orchestra, the journey of The Accidentals commenced in a public high school classroom in Traverse City, Michigan, over a decade ago. As the story goes, concertmaster violinist Savannah Buist and cellist Katie Larson raised their hands at the request of an orchestra teacher and wound up being musical soulmates.

Following the 2016 release of Parking Lot EP, Huffington Post touted The Accidentals among its “Sweet 16 of 2016,” and Billboard called them “the band to watch.”  On its heels, they signed a deal with Sony Masterworks label and 2017’s Odyssey rapidly accelerated the momentum.

Jumping to the big screen, the band scored the indie documentary One Simple Question and wrote

“Marrow” for the award-winning movie Almost Home. “Michigan and Again” showed up on an episode of The Boys on Amazon Prime Video and “Chekhov’s Gun” is the soundtrack for a Turner Classic Movies reel. RAM released a documentary with the band to promote their #Bandvan series, bringing viewers behind the scenes at SXSW and Folk Alliance to show what it’s like to be “in the van” with the band.

In 2018, The Accidentals began work on their fourth full-length album. The three-piece reached out to “two of our dream producers of all-time,” namely John Congleton [St. Vincent, Lana Del Rey] and Tucker Martine [The Decemberists, Neko Case]—and both obliged. Sessions with Congleton happened in L.A.

Grabbing the reins as co-producers, the music on Vessel takes shape as a natural evolution for The Accidentals. Underpinned and upheld by the orchestral core, the band tightly embraces their folk pop and Americana influences more than ever before with a common thread of their signature strings and “ethereal harmonies.” Not to mention, Larson and Buist both switch off not only strings and vocals, but also acoustic and electric guitar, bass, and mandolin.

About Sawyer Fredericks
Americana singer-songwriter Sawyer Fredericks, hailing from his family farm in central New York State, cut his teeth at the age of 13 playing local farmers markets, open mics, and iconic New York venues like Caffe Lena, the Towne Crier Cafe, and The Bitter End. With his deep, beyond-his-years original lyrics and melodies, raw, soulful vocals, and powerful live performances, Fredericks seemed an unlikely match for reality TV, but having been scouted by casting directors at 15, he quickly won over broad audiences with his genuine delivery and unique arrangements of classic songs, going on to win season 8 of NBC's The Voice.

Fresh from that whirlwind, Fredericks went forward with the release of his major label debut, A Good Storm, with Republic Records, an impressive blend of soulful Folk, blues, and rock, entirely written or co-written by Sawyer. Choosing to go independent, for more creative freedom, his 2018 Hide Your Ghost, fully written and produced by Fredericks, sheds the high gloss major label treatment, and stays true to Fredericks’s honest and elegantly stripped-down style, a self-described “free range folk,” incorporating elements of blues, roots rock, and jazz with live instrumental arrangements throughout. In writing about his top ten Americana albums of 2018 in No Depression and AXS Magazine, Chris Griffy recommends Hide Your Ghost as “a bluesy folk rocker with a no-frills production that relies on Fredericks' raw voice to carry the emotional weight.”

With song premieres in People Magazine and American Songwriter and an album preview in Billboard Magazine, on May 1, 2020, Fredericks released his fourth album, Flowers For You. “With his second independent album, Flowers For You, Fredericks is expanding his sound even more, moving from bluesy folk into more expansive Americana, rock, and tinges of jazz,” remarks Chris Griffy in Concert Hopper. Two songs from Flowers For You won top awards from the 18th annual Independe Music Awards, "Born" won in the Folk/Singer-Songwriter category and "Amen" won the Vox Pop award in the Social Action Song category. “Born” was recently officially added to SiriusXM’s Coffee House channel.

Throughout his career, Sawyer has played many festivals and prestigious venues like the Falcon Ridge Folk Festival with 2019 touring highlights including official showcases at SXSW, AmericanaFest, Folk Alliance International, and BMI's Island Hopper Songwriter Fest.