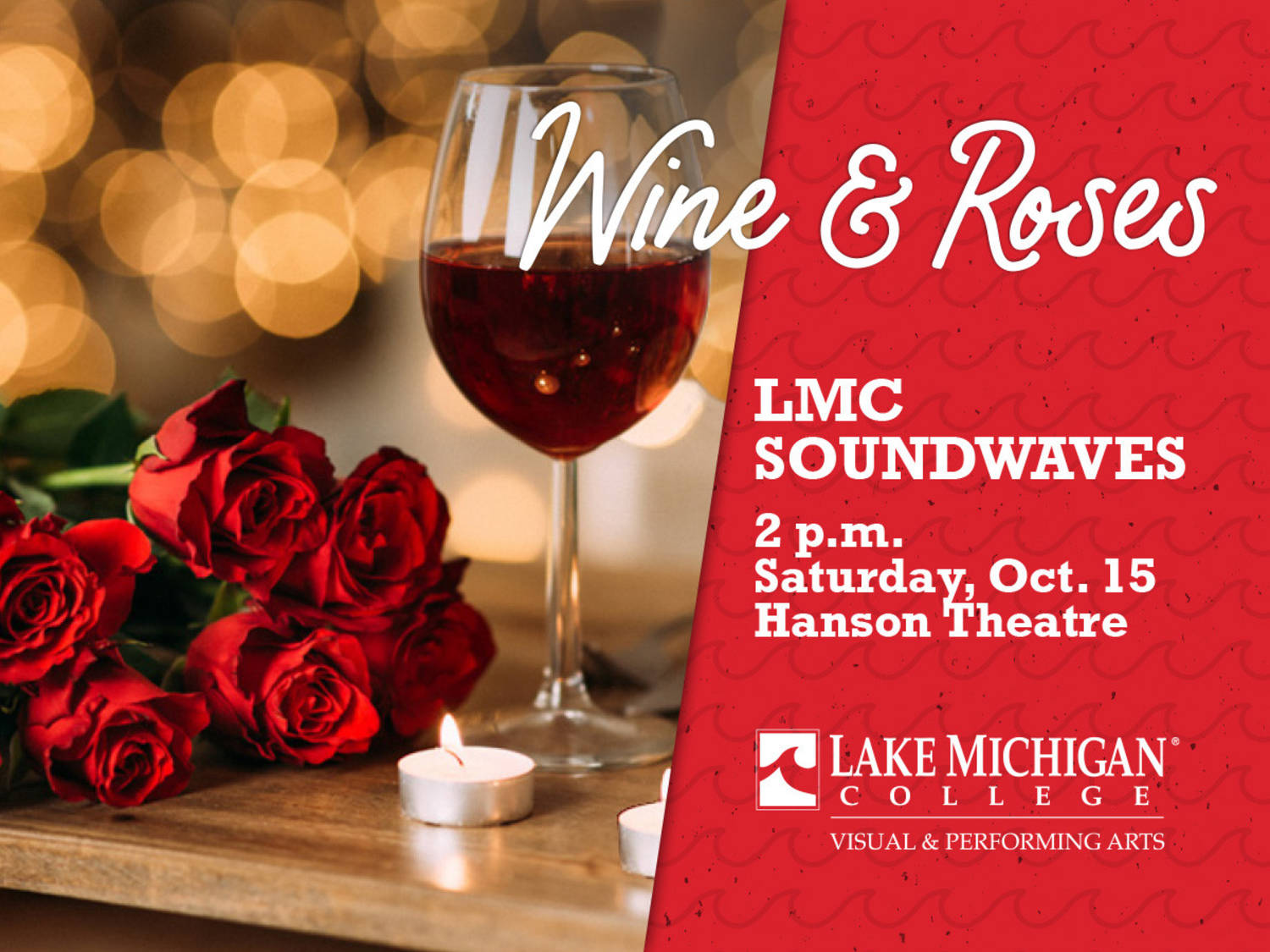 The event will feature the sounds of LMC Soundwaves and wine tastings from the College’s campus winery, Lake Michigan Vintners, all in a casual atmosphere. Each collection of rose-themed songs will be paired with a red or white wine. Campus winemaker Timothy Godfrey will explain the winemaking process and “notes” of flavor for each wine.

LMC Soundwaves is under the direction of Rebecca Derbas-Selvidge. This dynamic student ensemble performs frequently in concert each semester. The selections performed are drawn from the standard choral repertoire and include madrigals, motets, folk songs, spirituals, and jazz. Ensemble membership is comprised of LMC students by audition.

About the Director
Rebecca Derbas-Selvidge, soprano, holds a Bachelor of Music in Choral Education from Western Michigan University, a Master of Arts from the University of South Florida, and a Certificate of Musical Theatre Performance from the American Musical and Dramatic Academy in New York City. She is a Music Lecturer at Lake Michigan College.

She has performed with various ensembles including Lake Effect Jazz Big Band under Steven Reed, Gold Company under Dr. Steve Zegree, WMU Chorale under Dr. James Bass, and VOICES LMC, as well as regional and local theatre productions such as Sandy in “Grease!,” Mother in SMSO's “Ragtime,” and Penelope Pennywise in “Urinetown.” She has been the musical director for Twin City Player's “Sound of Music,” Children's Music Workshop's production of “Hairspray,” and CMW TeenStock's summer musical productions including “Les Misérables” and “Spamalot;” and directed “Xanadu.”

Derbas-Selvidge has performed at the International Association of Jazz Educators conference in Toronto and has appeared on several albums including WMU Gold Company's “Who Could Ask for Anything More” and “30,” Tim Hauser's “Love Stories,” and “Ditties for Kiddies,” a benefit CD for Little Kids Rock. She was writer/producer/performer for “A Woman's World Cabaret” at Danny's Skylight in New York City and has performed at such venues as The Cutting Room, The Triad, and Studio One in New York City. Derbas-Selvidge was co-singer/songwriter for the band Stoney End, a backup singer for Erin Hill Band, and a founding member of the Three Divas of Southwest Michigan with Carrie VanDenburgh and Katherine Rohwer.

Derbas-Selvidge is a proud alum of the Lake Michigan College music department where she received the Steven Sizer Vocal scholarship, received the Outstanding Musician of the Year award, and met her husband, Alan. She is mom to their son, Jack, and their family dog, Ginger.

About the Lake Michigan College Visual & Performing Arts Department
The Visual & Performing Arts department gives students the opportunity to reach new levels of excellence through classroom instruction and public performance. The program is based in The Mendel Center, the only performing arts center of its kind in southwest Michigan. Here, LMC students have the opportunity to study theatre, instrumental and vocal music, dance, drawing, painting, and more in a venue that attracts more than 100,000 patrons annually.

Auditions are held for select ensembles that perform on the same stages as world-renowned touring acts. Students in any major also have opportunities to audition for Broadway musicals and plays, join three different vocal ensembles, string and wind ensembles, a pop-rock ensemble, drumline and jazz band. One of only two colleges in Michigan to carry the prestigious All-Steinway designation, LMC has a team of highly qualified professors that bring real-world expertise to the classroom.